You have probably heard scientists quote p-values whenever they report the results from their experiment.

But, what is a p-value anyway?

In this article, I will clearly explain what a p-value is.

What is a p-value?

A p-value is an abbreviation of a probability value.

The p-value is a number that can be any value between 0 and 1.

But what exactly does this number represent?

The official definition of a p-value is quite difficult to understand:

A p-value is the probability of obtaining the observed difference (or a larger one) in the outcome measure, given that no difference exists between treatments in the population1

So, instead, the best way to explain what a p-value is, is to use an example.

Let’s say you want to perform an experiment to see if a new type of weight loss drug (Drug X) causes people to lose body weight.

So, you randomly sample a collection of volunteers and randomly assign them into two groups: Group A and Group B.

You give Group A a placebo. In other words, this contains no active ingredients. Group A are therefore the control group. And, you give Group B the new drug (Drug X).

The participants are weighed at the start of the study and at the end of the study. This way, you can work out the body weight difference.

At the end of the study you work out that Group A’s average body weight difference was 0 kg, in other words, they did not gain or lose any body weight.

Group B’s weight difference was -1 kg, so on average they lost 1 kg of their body weight.

So, does this mean that the drug worked?

To determine this, we first ask ourselves:

This is where the null hypothesis comes in.

Usually, the null hypothesis states that there are no differences between groups, for example.

So, our null hypothesis is:

Now, we ask ourselves:

If this null hypothesis were true, what is the chance (or probability) of discovering a 1 kg reduction (or more) in body weight in those treated with Drug X from our sample?

This probability, or p-value, measures the strength of evidence against the null hypothesis.2

The smaller the p-value, the stronger the evidence against the null hypothesis.

To determine the p-value, scientists use what are known as statistical hypothesis tests.

Common examples of statistical hypothesis tests include the Student T-test and a one-way ANOVA.

Since this is a top line overview, I will not bombard you with statistical jargon, but instead, pretend we have performed a statistical test using our data.

So, after inputting our experimental data into a statistical test, we get a p-value in return. Let’s say for our example, the p-value is 0.02.

It’s worth mentioning that the p-value is a fraction, however, it may be easier to convert this to a percentage to understand the concept better.

Essentially a p-value of 2% means that if the null hypothesis were true (that the two population means are identical), then there is a 2% chance of observing a difference as large (or larger) than what we observed in our sample.

In our example, this would translate to:

To put that into perspective, a 2% chance corresponds to 1 in every 50 experiments of this size.

But, how can this be? What is accounting for this 2%?

Simply, this 2% can be accounted for by random noise.

There are quite a few things that can impact a p-value, and some of these factors are collectively known as random noise or random chance.

One type of factor that can contribute to random noise, especially in human studies, is the coincidence random sampling.3

For example, humans can exhibit a large amount of variation between one another due to genetic and environmental influences.

If we relate back to our example, some humans may contain an unknown gene that speeds up their metabolism and causes them to lose weight more than those without the gene.

When recruiting volunteers for our experiment, we did not perform any DNA analysis before randomly assigning the volunteers to either Group A, the control group, or Group B, the Drug X group; so, there was no way in knowing who was a carrier or not.

Imagine a situation where, just by pure coincidence, more volunteers with the high metabolism gene, are placed in Group B, than Group A; so, it makes sense that this group lost more weight.

So, here you can see that by a pure coincidence of random sampling, this can have a knock-on effect on the p-value.

So, to sum up, a p-value refers to a probability value.

This p-value is a value between 0 and 1.

This number represents the probability of obtaining the observed difference (or a larger one) in the outcome measure of the sample, given that no difference exists between treatments in the population (the null-hypothesis is true).1 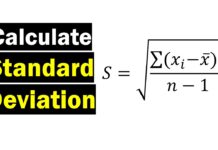 How To Calculate The Standard Deviation (Clearly Explained!) What Is Pearson Correlation? Including Test Assumptions