In this video tutorial, I’m going to show you how to perform a one-way analysis of variance (one-way ANOVA) test by using Microsoft Excel.

I’ll start by showing you how to perform the test, and then I will describe the results of the test.

For this example, I have data from 3 different male groups for their performance on the vertical jump test.

Each different group is in a different column and each cell represents a different participant’s height that they jumped (in cm).

And as you can see, I have 15 participants in each group.

So, that’s an overview of my example data.

What I want to do now is to perform a one-way ANOVA to determine if there is a significant difference between the average height measures of my 3 groups.

To be able to perform the one-way ANOVA test easily in Excel, it’s best to install or activate the Analysis ToolPak. This is an add on created by Microsoft to provide data analysis tools for statistical analysis.

To install the toolpak, go to File>Options.

At the bottom, you want to manage the Excel add-ins and click the Go button.

Then ensure you tick the Analysis ToolPak add-in, and click OK.

Now, when you click on the Data ribbon, you should see a Data Analysis button in a sub-section called Analyze.

Now we are ready to perform the one-way ANOVA.

How to perform a one-way ANOVA in Excel

To perform a one-way ANOVA in Excel, Go to Home>Data Analysis.

The first thing you need to do is to select the Input Range; this is essentially the data we want to run in the analysis. You can highlight the labels in the first row if you want (more on this shortly).

Next, you need to select how the data are grouped (in columns or rows). In my example, I will select the by columns option because each group’s data is in a separate column. If your data was entered in rows instead of columns, you could select the Rows option.

If you highlighted the labels in your first row when selecting the input range, then tick that option.

The next option is to specify your alpha level.

This is essentially your significance threshold. Usually this is set at 0.05, meaning that if the P value is ≤0.05, you would reject the null hypothesis and accept the alternative hypothesis.

I will keep this set at 0.05 for this example

Finally, you need to select the Output options.

There are 3 choices here:

For my example, I’ll select the second option and call the sheet Results.

Interpretation of the results

I’ll now interpret the one-way ANOVA results given by Excel.

The first table presents a summary of the data in the analysis.

Here you will find:

So that’s a look at the summary table, let me now focus on the ANOVA results table underneath.

The results here are split into three rows.

Each column of the table represents a different output. I’ll now briefly explain what each are:

Before I interpret the P value for the one-way ANOVA test, let me describe my null and alternative hypotheses.

There is no difference between the means of my 3 groups

There is a difference between the means of my 3 groups

So, remember before when you specified your alpha value?

So, since my P value is greater than my alpha value of 0.05, we will fail to reject the null hypothesis.

Therefore, there is no difference between the means of my 3 groups. In other words, each group on average performed more or less the same on the vertical jump test.

Now, if your one-way ANOVA result was significant (P≤α), then the test can only tell you that there is a difference between the group means.

It’s very important to understand that the test will not tell you where these differences lie. So, you will not know which specific group is different from the rest.

To investigate significant results further, you will need to perform post-hoc tests.

There are many types of post-hoc tests available, such as Tukey, Bonferroni and Holms’.

I’ll discuss these in more detail and show you how to perform these in Excel in future tutorials.

In this tutorial, you have learnt how to perform a one-way ANOVA test in Microsoft Excel, and you also know how to interpret the results. 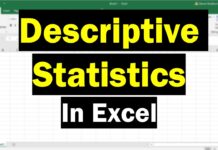