What is a Pearson correlation?

A Pearson correlation, also known as a Pearson Product-Moment Correlation, is a measure of the strength for an association between two linear quantitative measures.

For example, you can use a Pearson correlation to determine if there is a significance association between the age and total cholesterol levels within a population. This is the example I will use for this guide.

Assumptions of a Pearson correlation test

There are just a few assumptions that data has to meet before a Pearson correlation test can be performed. There are:

How to perform a Pearson correlation in SPSS

I have created a simple dataset containing 10 rows of data, each row signifies one person. I have two variables, the first being Age (in years) and the other being blood total Cholesterol levels (in mmol/L). For this example, the null hypothesis is:

There is no correlation between participant ages and blood total cholesterol levels.

On the other hand, the alternative hypothesis would read:

There is a correlation between participant ages and blood total cholesterol levels. 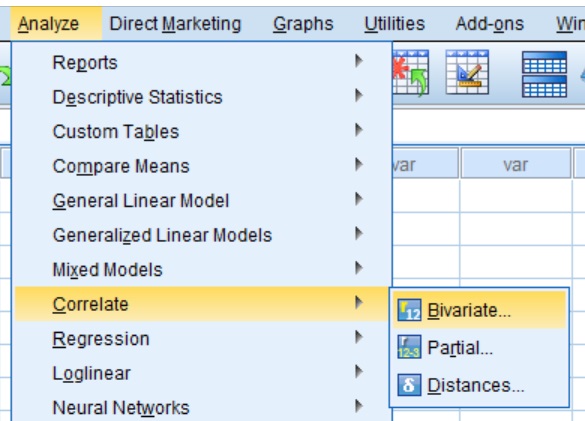 A new window will open called Bivariate Correlations. Here, you need to specify which variables you want to include in the analysis.

Drag both variables from the left window, to the right window called Variables. In this case, both Age and Cholesterol will be moved across. Note, that you can drag more than two variables into the test, with each combination possible being tested for at the same time.

2. Ensure that Pearson is ticked under the title Correlation Coefficients. Since we have not made any prior assumptions, we will also leave the Test of Significance as Two-tailed. By going to the SPSS Output window, there will be a new heading of Correlations with a correlation matrix displayed. Within the grid, there are three pieces of information which are listed below.

By looking at the results in the above table, it can be seen that the correlation between age and blood cholesterol levels gave a Pearson Correlation Coefficient (r) value of 0.882, which indicates a strong positive association between the two variables. Also, the P value of the association was 0.001, thus indicating a highly significant result. Therefore, I will reject the null hypothesis.

When reporting the results of a Pearson Correlation, it is useful to quote two pieces of data: the r value (the correlation coefficient) and the P value of the test. For the example above this could read: